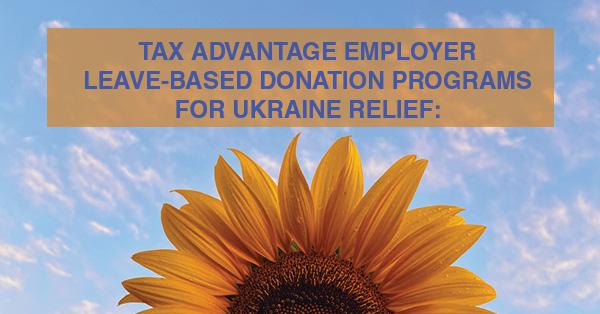 In Notice 2022-28 the IRS announced that employers can establish tax advantaged programs where employees donate some or all of their unused paid leave for certain relief for victims of the further Russian invasion of Ukraine.
Generally, if an employer allows an employee to “cash in” leave and direct that it be paid to a charity, this would be treated as taxable income to the employee (subjecting both the employee and employer to payroll taxes on this amount) followed by a potential deduction being allowed to the employee for the amount of the charitable contribution. However, in Notice 2022-28, the Service is allowing for an exception to the income inclusion requirement through the end of 2022.

The Notice describes this program broadly as follows:

The Department of the Treasury and the Internal Revenue Service are aware that employers may have adopted or may be considering adopting employer leave-based donation programs to aid citizens and residents of Ukraine; individuals working, traveling, or currently present in Ukraine; or refugees from Ukraine, collectively referred to in this notice as “victims of the further Russian invasion of Ukraine.” This notice provides guidance under the Internal Revenue Code (Code) on the federal income and employment tax treatment of cash payments made by employers under leave-based donation programs to aid victims of the further Russian invasion of Ukraine. This guidance is similar to the guidance provided in Notice 2001-69, 2001-46 IRB 491, as modified and superseded by Notice 2003-1, 2003-2 IRB 257, regarding charitable relief following the September 11, 2001, terrorist attacks.