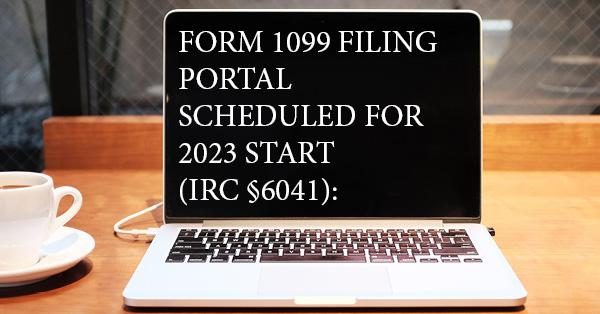 The Act requires IRS to develop an Internet portal by January 1, 2023, that allows taxpayers to electronically file Forms 1099. The portal is to be modeled after a Social Security Administration (SSA) system that allows employers to file Forms W-2 with SSA. The website will provide taxpayers with IRS resources and guidance, and allow them to prepare, file and distribute Forms 1099, and create and maintain tax records.

June 2022 Status Update: The new internet filing portal is on schedule to be launched in early January 2023.

The IRS urges taxpayers to not be misled into believing that digital assets cannot be monitored and possibly exposing themselves to civil fraud penalties and criminal charges that could result from failure to report transactions involving digital assets. "The IRS is able to identify and track otherwise anonymous transactions of international accounts as well as digital assets during the enforcement of our nation's tax laws," Commissioner Rettig said. "We urge everyone to come into compliance with their filing and reporting responsibilities and avoid compromising themselves in schemes that will ultimately go badly for them."