NTA Blog: Update on Offset of Recovery Rebate Credits: The IRS Has Agreed to Exercise Its Discretion to Stop Offsets of Federal Tax Debts

NTA Blog: Update on Offset of Recovery Rebate Credits: The IRS Has Agreed to Exercise Its Discretion to Stop Offsets of Federal Tax Debts 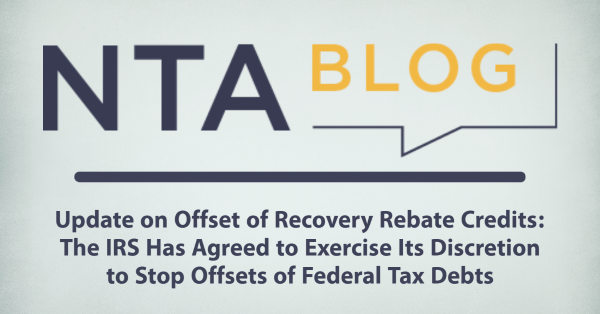 In a previous blog, I pointed out that a change in the law made in late December affected the treatment of recovery rebate credits (RRCs) claimed on taxpayers’ 2020 income tax returns. Unlike the advance payments issued to individuals last spring and in early January, the credit claimed on a 2020 tax return will be reduced to pay off certain outstanding debts. This offset creates an inconsistency between the treatment of the advance payments and the treatment of RRCs claimed on 2020 tax returns where the RRC will be reduced by outstanding liabilities. This is a big deal for taxpayers affected by the change.

Good news: The IRS has agreed to use its discretion to bypass offsets for federal tax debts for taxpayers filing 2020 returns that claim the RRC.

By Way of Background

When Congress directed the IRS to issue stimulus payments (otherwise known as Economic Impact Payments or EIPs) of $1,200 per adult and $500 per qualifying child beginning in April 2020 and then for an additional $600 per person beginning in December, it required that the payments be issued without reduction to satisfy other debts of the recipient (except for child support for the first round of payments). The rationale seemed clear: Individuals in debt are often the ones financially struggling the most, and Congress wanted the funds to reach these people without any reductions as soon as possible.

For individuals who received their EIPs as advance payments, the IRS was prohibited from offsetting the payment to satisfy outstanding debts (other than child support during the first round of payments). For individuals who did not receive some or all of their advance payments, the Coronavirus Aid, Relief, and Economic Security (CARES) Act provided they could claim an RRC on their 2020 income tax return, and the IRS was prohibited from reducing the credit to the same extent as with advance payments. Thus, individuals who did not receive advance stimulus payments were told throughout 2020 that they would get the same benefits when they filed their 2020 tax returns.

In December, however, Congress changed the law, allowing the IRS to reduce the RRC claimed on a taxpayer’s 2020 federal tax return to satisfy outstanding federal liabilities and requiring the IRS to reduce the RRC to satisfy child support and other federal and state obligations. This last-minute change harmed individuals who, maybe through no fault of their own, hadn’t received their advance EIPs in the full amounts to which they were entitled.

It seemed odd that Congress, aiming to provide broad economic relief to the public and excluding stimulus payments from most offsets, would suddenly make a 180-degree turn and decide to offset RRCs – which are simply a delayed version of the stimulus payments – for those unlucky taxpayers who had not received advanced payments and were now required to claim the credit on their 2020 federal tax returns.

Last week, a CNN article quoted a spokesperson for the House Ways and Means Committee as saying Congress changed the law “largely due to administrative difficulties associated with exempting a sole credit.”

After the law change, I continued to advocate for the IRS to use its discretion and not offset RRCs for outstanding federal tax debts to preserve the goal of the credits; namely, to ensure that Americans receive fast and direct relief in the wake of the coronavirus (COVID-19) pandemic.

Initially, it appears the IRS believed it could not do the programming required to exclude RRCs from offset. When I was drafting my earlier blog on this subject, the IRS told us it was looking into the issue in January and, after the blog was published, informed TAS it ultimately could not get the programming done in time for the start of the filing season, February 12. The CNN article last week cited an IRS spokesperson as saying that “[t]he agency is reviewing what might be possible.”

It turns out the IRS’s original filing season programming did allow for offsetting RRCs for child support but bypassed the offset for all other outstanding debts, as provided in the original version of the CARES Act before it was amended in December. Last week, we learned the IRS had gone back and “corrected” the original programming to ensure that all RRCs were offset to satisfy federal and state debts, consistent with the change in law. We once again renewed our plea that the IRS exercise its discretion to correct the inequities.

I am very pleased that the IRS has agreed to exercise its discretion under IRC § 6402(a) to refrain from offsetting RRCs to satisfy federal tax debts. It has committed to doing so as quickly as practical.

However, that is not a complete solution for two reasons.

First, federal tax offsets will have already been made for taxpayers who file their returns before the IRS can implement this programming fix.

Second, this change will not affect most categories of mandatory offset. The Consolidated Appropriations Act, 2021 (CCA) retroactively revised the CARES Act and effectively directed the IRS to apply regular offset rules to the RRC. Under IRC § 6402, the IRS only has discretion to refrain from offsetting overpayments to satisfy federal tax debts. It is required to offset refunds to satisfy numerous other categories of debt, including state tax debts, overpayments of unemployment insurance benefits, and overpayments of certain federal benefits. Therefore, there remains a significant disparity between the treatment of taxpayers who received advance payments and the treatment of taxpayers who did not receive advance payments and are claiming their benefits as RRCs.

I can only assume Congress continues to believe the IRS cannot program its systems to avoid offsetting RRCs, because the American Rescue Plan Act tracked the CCA’s RRC offset language for the third round of stimulus payments ($1,400) authorized last week. Thus, the statutory scheme in its present sate will continue the inequities described above during the 2022 filing season.

By allowing systemic relief for payments of RRCs without reduction for federal tax debts, the IRS will lessen burdens on taxpayers and the IRS’s resources and provide a needed lifeline to the country’s most vulnerable individuals and families. Similarly situated individuals – those who received an advance payment and those receiving the RRC through their 2020-filed return – should be treated consistently. I anticipate the corrections will be made in the near future. For taxpayers who already have had their RRCs offset to repay federal tax debts, we will work with the IRS to try to identify a way to make them whole.

In addition, I recommend that Congress take another look at the law and consider providing that RRCs are exempt from reduction or offset to the same extent as advance payments (as it did in the CARES Act) for the 2022 filing season. When eligible individuals have not received some or all of the EIPs for which they were eligible, in most cases it has not been because they did anything wrong. It has generally been because the IRS did not properly identify them and get the advance payments to them. As a result, individuals who did not receive the first round of EIPs had to wait nearly a year to receive their benefits. They should not now be further penalized by having some or all of their RRC offset to pay debts when that would not have happened if they had received advance payments.