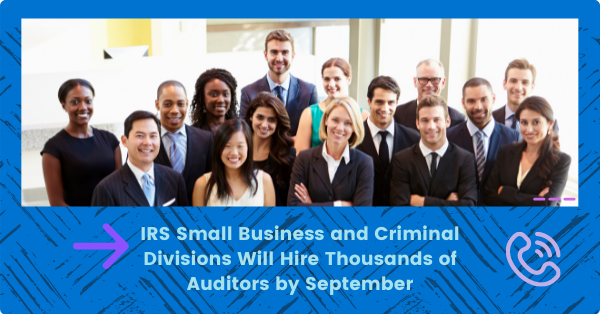 At a New York University conference, the co-commissioners of IRS's Small Business/Self- Employed Division (SB/SE), and the commissioner of the Criminal Investigations Division (CI), announced that they will be hiring thousands of auditors by the end of September 2021.

President Biden and the House Appropriations Committee have both submitted budget increases for IRS for fiscal year 2022 - $1.7 billion more than IRS received in fiscal year 2021.

IRS SB/SE co-commissioners De Lon Harris and Darren Guillot spoke to the conference. “We’re going to be ready to go, as soon as that budget hits... to start bringing in what could be double the number of folks that we are looking at bringing in this year, just for exam alone.” They noted that they plan to hire 1300 field revenue officers, 400 tax compliance officers who will be available for "in person audits" (formerly called "office audits"), and 518 automated collection (ACS) phone representatives. Guillot said that, after taxpayers receive an IRS notice threatening to garnish wages or levy property, “you expect when you call that [ACS] phone number that we’re going to answer,” he said.